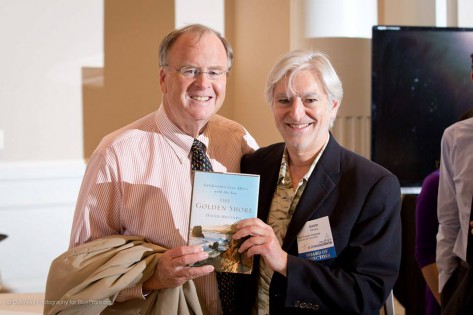 Shortly after declaring himself a member of the Sea Party (the founding member if inspiration counts) Congressman Sam Farr of Monterey announced that he will not seek re-election in 2016, saying he wants to focus on being a “full-time grandpa.”

Farr, 74, made his retirement announcement at a news conference in Salinas California, saying it’s time to come home after more than two decades in Congress.   Farr was first elected to Congress in 1993 in a special election to succeed Leon Panetta.  Among his many progressive achievements he was a founding member of the House Ocean Caucus.  He was a speaker at Blue Frontier’s founding dinner in 2004 and its last Blue Vision Summit this May.  In 2009 he was the winner of our Peter Benchley Ocean Award for Policy and in 2014 presented a Policy award to his congressional predecessor and former Secretary of Defense Leon Panetta.  House Minority Leader Nancy Pelosi (D-San Fransisco) called Farr a “tenacious, far-sighted champion for California’s Central Coast and hard-working families across America.”  He will be welcomed home with honors and salutations to California’s Golden Shore.

Will You Be Our Hero?

I’m thrilled that Blue Frontier, a small organization that splashes way above its weight class, has accomplished some major initiatives in 2015 and that we’re set to do even better as part of the Sea Party Coalition in 2016.  Hopefully you received our end of yea 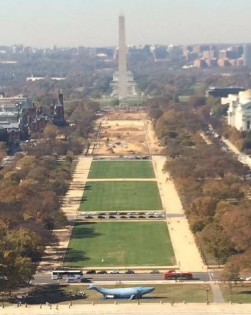 r request for your financial support to keep us on course in the coming year.  At our 2015 Blue Vision Summit, and again just last week on his radio show Ralph Nader said he knows of no non-profit organization that accomplishes more for its size and with the dollars its given than does Blue Frontier.  Many others have said the same.  The challenge is to scale up our programmatic solutions faster than the problems we confront as we try to grow an effective movement for our ocean, coasts and communities.

Please check out our full year-end letter if you haven’t read it yet.

And please consider making a tax-deductible contribution to Blue Frontier this holiday sea/sun.  You can go online to donate or send a check to: Blue Frontier PO Box 19367 Washington DC 20036.

Among our many projects worth checking out on our newly updated website www.bluefront.org your donation will allow us to continue sending you Blue Notes, now in its 10th year.

Offshore Oil – The Next Keystone 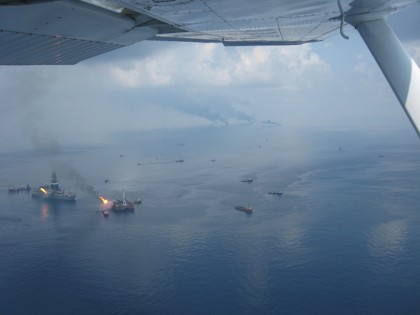 So what do conservative Congressmen Curt Clawson of Florida and Mark Sanford of South Carolina, liberal Congressman Sam Farr of California, climate activist Bill McKibben, a former petroleum engineer, an evangelical minister and a surfer all have in common? No, it’s not a joke.  They all spoke out against offshore oil and gas drilling at our D.C. press conference for the Sea Party Coalition on November 4.  The Sea Party aims to make opposition to proposed offshore drilling a major issue in the 2016 election.

President Obama’s decision two days later to cancel the Keystone XL pipeline after seven years of polarized debate, and the pushback it received, increases the likelihood that energy and the environment will play a prominent role in the upcoming election.  And in the wake of the recent terrorist atrocity in Paris (followed by similar outrages in Mali and Nigeria) the Paris Climate Summit and what comes out of that will likely further polarize the elections and challenge the Republican Party’s climate change position of denial.  My hope is that it will also mark the beginning of a global commitment to end our dangerous oil addiction that both funds terrorism and threatens the planet.

For my complete analysis of our Sea Party event under an 85-foot life sized blue whale see my article “Fish don’t like oil spills and neither do I”: Finally, something environmentalists and conservatives can agree on,” in Salon magazine. 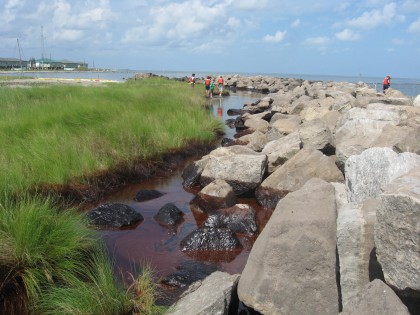 On November 19, Oceana, the Southern Environmental Law Center and other environmental groups invited business people and locally elected leaders to Washington D.C. to meet with the Obama administration and members of Congress to talk about their opposition to offshore drilling in states that have been targeted for acoustic surveying and drilling (and inevitable spilling).

After Shell Oil hit a dry hole in the Chukchi Sea and announced it was giving up fossil fuel exploration in the Arctic Ocean (for now) and the Obama administration cancelled two other pending oil lease sales off our Northern coast (see Blue Notes #140) two strategies seem to have emerged among those battling offshore oil.  One is focusing on the hope that President Obama, increasingly committed to addressing climate change and leaving behind an action-based legacy, will reverse course in the final days of his administration and also withdraw his proposed Atlantic lease sales.

;lksa;dlka;sdlkdsa
The focus of this work combines inside the beltway lobbying with continued grassroots mobilization to convince mostly Republican pro-oil governors in the South (along with pro-oil drilling democratic Governor Terry McAuliffe of Virginia) that it will cost them politically to continue on the track they’re on.  The Obama administration has indicated it will not pursue leasing in federal waters off states that don’t want it, so obviously if governors can be turned against the drilling that would make it easier for Obama to withdraw the lease sales. 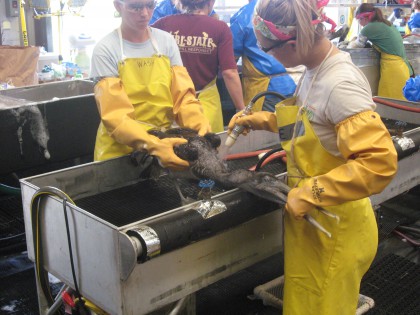 ;lksa;dlka;sdlkdsa
The Sea Party Coalition including the Sierra Club, Greenpeace, Blue Frontier and some 60 other groups believes that while it would be great if President Obama were to reverse his past mistake in opening up the Arctic and Atlantic to drilling, it’s at least as likely that decision will be made by the next president.  They plan, through voter education and mobilization to make offshore oil drilling an issue during the 2016 elections that the presidential candidates will have to address.  Then next summer, as Blue Frontier did in 2012, we will send a letter to the final two candidates from ocean leaders in conservation, recreation, science and business to find out where they stand on the future of our public seas including offshore drilling and publicize the results so that the public can know where they stand on protecting the blue in our red, white and blue.

;lksa;dlka;sdlkdsa
In the 1980s when California defeated plans for new offshore drilling (see my book, ‘The Golden Shore’) the issue was coastal pollution versus energy.   Today, as climate activist Bill McKibben pointed out at the Sea Party press conference, even if there is no oil spill from offshore operations and the oil is refined and burned in cars and power plants we create a carbon-dioxide spill into that atmosphere that will continue heating the ocean, raising sea levels and changing the basic chemistry of seawater in a way not good for complex life on our blue planet

lksa;dlka;sdlkdsa
For millions of people from Dewey Beach Delaware to Pawley’s Island South Carolina and Key West Florida questions of strategy or whether offshore drilling is an ocean issue or a climate issue are less important than that the threat of offshore oil go away, hopefully forever and that we begin to deal seriously with the rising seas and more powerful typhoons, droughts and extreme weather that are becoming a part of our daily lives because of our burning of fossil fuels (and forests).
The good news is there are some ideas so inherently stupid – be it processing and pumping tar sands for export like the Keystone scheme proposed or continuing high-risk at sea oil exploitation – that we can actually defeat them and offer something better (job generating clean energy and marine sanctuaries) if we all school together. 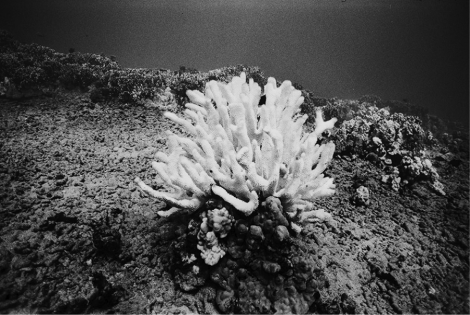 Last month while snorkeling in Hawaii I witnessed reefs turned skeletal white by coral bleaching. We’re now in the third global bleaching event since 1998 caused by warming oceans driven by the burning of fossil fuels. That’s another reason I’m incensed that new offshore oil drilling again threatens our coasts.
Wayne Levin, whose underwater black and white photographs can be found in the Museum of Modern Art in New York, sent me a number of pictures he took of the contrast between the bleached and still healthy Hawaiian corals.

Here’s the story – “Can the World’s Coral be saved” that we put together for the Los Angeles Times. 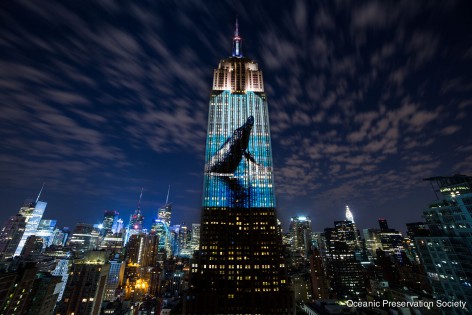 Along with global bleaching there is a global pandemic of sea star deaths linked to a virus that turns more virulent in warming seas.  Two reports published this year in the journal Science confirm that climate disruption is also accelerating the sixth global extinction crisis now underway due to a range of human activities.

On December 2nd, during the opening days of the Climate Summit the Discovery Channel will be broadcasting Louis Psihoyos’s latest documentary – Racing Extinction.  The Peter Benchley Ocean Award (oh yes, and Academy Award) winning director of ‘The Cove’ has created a fast-paced tour of the extinction crises taking place on our planet, that is both an exhilarating and yet sobering investigative report on the great untold news story of our lives  – how we’re destroying our home planet’s web of life but might still be able to reverse course.  Of course millions of people will have to move from passive consumers to actively engaged citizens who give back to their communities, both human and wild.  As a starting point there will be over 1,000 house viewing parties in the U.S. on the 2nd.  For more go to http://racingextinction.com/

Please send us your breaking news from across the nation and our blue planet. 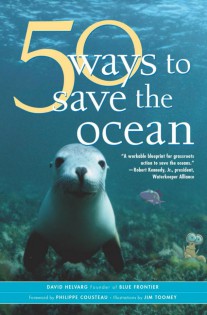 This will help us in building the networks of activism and media needed to communicate the wonder and the warnings about our salty blue frontier at risk.  One great tool for responding to the risk is our book, ’50 Ways to Save the Ocean’ which also makes a great stocking stuffer for when Santa and his school of dolphins come riding up to your beach front cabin.

You can order on Amazon or, if you’re a non-profit do bulk orders of 10 or more for 40% of cover price from Ami@newworldlibrary.com

Best fishes from the Blue Frontier team including myself Kathleen, Lauren, Margo and the board.