In the Bill Murray Movie the same day keeps repeating itself over and over again. I’m beginning to have similar vibes about some of the news I’m reporting on or involved in (as Scoop Nisker used to say, “If you don’t like the news go out and make some of your own.”)  Before dedicating myself full time to the other 71 percent of our blue planet I used to report on public lands conflicts and wrote a book about them called ‘The War Against the Greens.’ 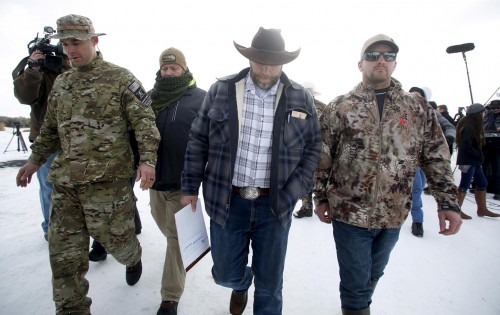 The recent occupation, arrests and shoot-out including one death at the Malheur Wildlife Refuge in Eastern Oregon is part of a pattern of violent opposition to federal land management in the West that occurs every decade or so, mainly because it works.  That is it works for polluting public lands industries like hard rock (gold and silver) mining, timber and cattle grazing (with some of the largest federal grazing permit holders including a multi-national mining company and the Mormon Church).  Violent intimidation and death threats directed against public employees and conservationists by Western Boomers of the 19th century, Sagebrush Rebels of the 1970s, the Wise Use movement of the 1990s and now the Bundy Gang and their “Patriot” Militia pals, with support from Western politicians and right-wing media has succeeded in preventing reform of outdated laws impacting our American wild lands.  Despite years of documentation by watchdog agencies such as the GAO and Congressional Research Service on how they cost U.S. taxpayers millions of dollars while degrading the terrestrial environment, no one in Washington has the intestinal fortitude to reform the 1872 Mining Act, the 1934 Taylor Grazing Act and similar industry subsidies, perhaps out of fear of getting gut shot both politically and literally.

For more detail check out my Sierra magazine story at:  bit.ly/1Q7ORXh

B. Coastal Commission Under Attack

California is where the Western Frontier turned to liquid and a Gold Rush and World War transformed ‘The Golden Shore.’ The coastline defines California like no other part of our geography.  Without it, we would just be a skinny clone of Nevada.  If you’ve seen recent news stories on apartment buildings falling into the sea in the town of Pacifica during the latest El Nino, those apartments were built before the California Coastal Commission was established in 1972.  The Commission’s mission is to stop unsound development along the shore and guarantee public access to our beaches. 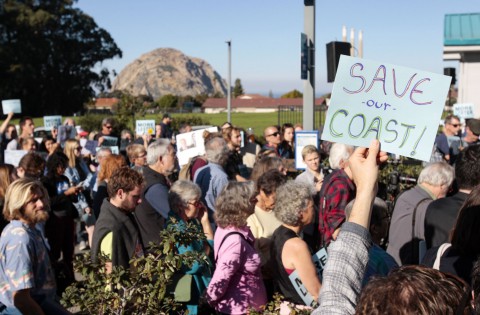 Ironically Governor Jerry Brown (in his original term) signed the Commission into law.   For 40 years, despite many compromises, it is done an extraordinary job preventing coastal sprawl, securing large sections of wild coast for public use, preventing new offshore oil drilling and now providing California a unique opportunity to respond to sea level rise.  Much of the credit goes to the late Peter Douglas the commission’s tough pro-environment Executive Director for over 30 years who died of Cancer in 2012 (the year he received a Peter Benchley “Hero of the Seas” award).  Republican Governor Pete Wilson’s business-friendly commission appointees tried to fire him in 1996 and failed due to public outpourings of support.  Now Democratic Governor Brown’s pro-development appointees have fired Peter Douglas’s successor Charles Lester claiming he’s unresponsive to their suggestions (to grant more developer permits).  They offered him a chance to resign quietly in January but he opted for a public hearing.  Environmentalists, 35 former commissioners, every newspaper editorial page in the state, State House leaders and others have expressed support for the low-key but conservation-oriented Lester and his staff and opposition to what they call the commission’s “Coup.”  On February 10 the public hearing was held.  Hundreds of citizens drove to the remote coastal town of Morro Bay to testify in defense of Lester.  Still, after 7 hours of open hearings, and their legal counsel telling them they didn’t have to, the commission went behind closed doors to vote 7- 5 to fire Lester.  It’s like Peter Douglas once said ‘The coast is never saved.  It’s always being saved.”  The battle will definitely continue.

Finally all the new arguments being made by the Offshore Oil Industry about safer new drilling technologies, tens of thousands of new jobs coming to coastal communities and how oil is compatible with environmental protection, tourism, fishing and other coastal activities sound like the hollow echoes of older arguments because they are.  These are the same sound bites we heard in California in the 1980s, the last time the Feds tried to open up large swaths of coastal waters to drilling.  Of course these ‘get rich quick at no cost’ arguments are as fallacious today as they were 30 years ago.  Like the happy ending of Groundhog Day the growing opposition to proposed oil exploration and lease sales along the Atlantic coast reminds me of the popular uprising that defeated the Reagan Administration’s attempt to drill off the West Coast.  It’s all about love, of the existing beaches and coastlines where people live, work and play. 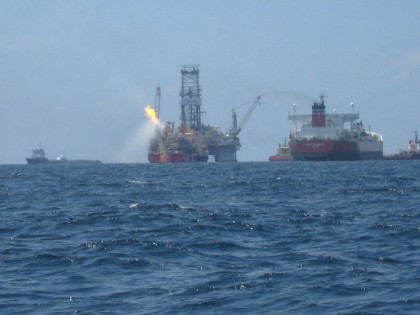 In just the last few weeks the opposition has grown even larger, from protests in New Jersey led by the state’s two U.S. Senators, to the number of coastal towns and cities where resolutions against offshore drilling have passed (now over 100).  Following up on last May’s Blue Vision Healthy Ocean Hill Day where delegations from 24 states called for no new offshore drilling, Oceana held a coastal summit and lobby in D.C. this January with several hundred East Coast activists, outspoken mayors and celebrities like Ted Danson and Kate Walsh.  Last week was Surfrider Foundation’s turn, with a third round of   citizen lobbying against oil drilling that included recreational ocean users and beachfront businesses.  Earlier this month Environment America, 350.Org and other groups presented the White House with a petition signed by 2 million people calling on the Obama administration to pull the plug on offshore drilling when it releases it’s latest iteration of it’s 5-year leasing plan some time in the next few weeks.

Still, the decision on whether it’s time to end fossil fuel development in U.S. waters will likely be up to the next president. Will the 2016 candidates address offshore oil drilling? It seems we’re making them do just that as reported in a January 21st McCatchy story on the upcoming South Carolina primary.

Based on this and other sources we’ve compiled the following breakdown on where the Presidential Candidates stand:

Hillary Clinton: In a Dec. interview Clinton said she’s “very skeptical about the need or the desire for us to pursue offshore drilling off the coast of South Carolina’’ or other Southeastern states.

At a campaign event on Feb. 9 asked if she would “stop oil drilling in the Arctic, the Atlantic, and the Gulf?” Clinton replied, “I’ve already said that I will stop it in the Arctic and the Atlantic.”

Bernie Sanders: Sanders has said he would block all offshore oil and gas development.

Jeb Bush: Bush supports offshore drilling, but as Florida governor he fought to keep it off his state’s coast. Then a few years later, he supported a bill that would open much more of the Gulf including off of Florida, while providing a 125-mile buffer. His record could cause problems on the campaign trail.

Dr. Ben Carson: Asked his position on new offshore drilling in the Arctic and off the Atlantic Dr. Carson responded:

“As we intelligently tap our own resources, we must doggedly pursue other energy sources.”

Ted Cruz: Cruz introduced recent legislation that would give “deference” to coastal states to determine whether to approve drilling. “He proposes to allow increased drilling,” said a spokesman.

John Kasich:  He has said, ”I’m definitely not opposed to it, but you’ve gotta do it the right way.”

Donald Trump: Trump’s campaign has not taken an official position on the issue. However, his previous statements indicate he would support expanded offshore drilling.  Then in a Feb. 13 interview Trump said “It would be a little bit of a shame (to expand drilling closer to Florida), because there’s so much fracking, and there’s so much oil that we have now that we never thought possible. That’s an issue I’d absolutely study and do the right thing.”

For all the latest on the continuing battles to stop offshore oil drilling and related climate and pollution stories check out the Sea Party 2016 Facebook page with it’s daily breaking news provided by Sea Party organizer (and news dissector) Lauren Townsend. And if you’d like to order Sea Party T-shirts we now have them in S, M, L and XL. 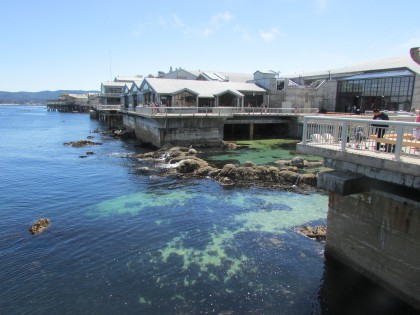 The 9th annual Peter Benchley Ocean Awards are moving to a new locale this year. On Friday May 20 they’ll take place at the world-famous Monterey Bay Aquarium. The next day there will be a public seminar and additional activities at the nearby Asilomar Conference Center and oceanfront hotel. I just got to visit Monterey on a preparatory trip and was reminded of what a world-class nexus of ocean wilderness, science and exploration this small coastal city and deep ocean bay are. One indicator is that of the 64 U.S. and global leaders to receive a Benchley Award to date (including this year’s winners) 5 are from this tiny section of our vast blue marble planet. For more on this year’s eight winners check out my Nat Geo blog; http://voices.nationalgeographic.com/2016/01/06/a-new-raft-of-ocean-heroes/ 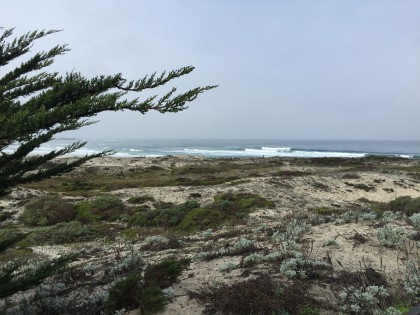 For more on the Awards including how to buy a ticket or become a sponsor go to http://www.peterbenchleyoceanawards.org

Have you ever considered what makes Ocean Governance so funny? If not you probably haven’t seen any of the ten animated short videos done by Sherman’s Lagoon cartoonist (and Blue Frontier board member) Jim Toomey for the Pew Charitable Trusts. Their ‘Visual Glossary of Ocean Terminology’ may have the best animated/live action sequences since ‘Who Framed Roger Rabbit.’ If you’ve ever asked yourself, ‘Can ‘Ecosystem-Based Fishery Management’ really make me chuckle?’ check out his cartoon fish (including a cameo appearance by Sherman), reefs and people, plus Jim proves rather animated himself. 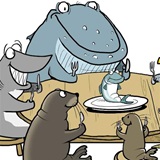 Please send us your breaking news from across Seaweed Rebel Nation at info@bluefront.org. This will make for good Blue Notes fodder and help us in building the network of activism and media needed to communicate both the wonder and the warning of our salty blue frontier at risk.  And feel free to use our Blue Movement Directory to connect with over 1,400 ocean and coastal organizations working to protect our coasts, ocean and communities that depend on them.

The One That Got Away

Finally, we appologize about having missed our January Blue Notes, our first monthly break in over a decade. If you enjoy the Blue Notes newsletter please consider making a tax-deductible charitable contribution to Blue Frontier to help us continue our work at: http://www.bluefront.org or send a check to: Blue Frontier, PO Box 19367 Washington D.C., 20036.