Sanctuaries in a Sea of Oil

July 26 is the deadline for public comments to defend our Marine Monuments and National Marine Sanctuaries! 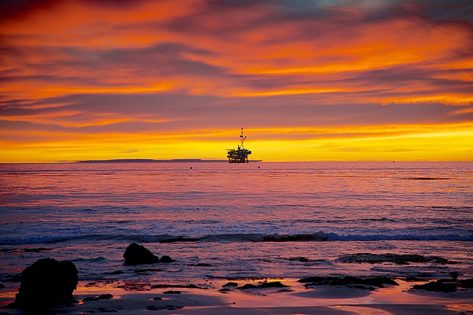 In late April President Trump issued his “America First Offshore Energy” Executive Order that, along with threatening to put an end to the only significant safety regulation resulting from BP’s 2010 Deepwater Horizon blowout disaster in the Gulf of Mexico, also ordered a review of 27 national monuments that had been declared or enlarged over the last 20 years. He then doubled down with instructions to reconsider recently expanded marine monuments and sanctuaries.

I wrote about this latest threat to our ocean and coastal economy in the July 7 edition of the Los Angeles Times. You can read the full story here.

To recap briefly: Land and sea monuments are designated by presidents under the Antiquities Act of 1906; marine sanctuaries are established by the Secretary of Commerce or Congress under the National Marine Sanctuaries Act of 1972.

But it was not until the 1980s that Marine Sanctuaries expanded dramatically including in California and Florida thanks to growing public fear that these waters might otherwise be opened up to oil drilling.

Trump’s new attempt to roll back National Monuments and shrink Marine Sanctuaries is based on concern about lost “opportunity costs” of not being able to drill for oil or mine for sub-sea minerals. These, along with waste dumping, are the main activities not allowed in Marine Sanctuaries. Of course this “loss” ignores the many ‘gained opportunity benefits’ for coastal economies, communities and ecosystems that come from protecting exceptional parts of our public seas; kelp forests, coral reefs, historic shipwrecks and the like. Not to mention the science that tells us we need to leave most of our known reserves of fossil fuels in the ground and under the seabed if we are to avoid the most catastrophic impacts of climate change.

Your comments concerning the eleven Marine Monuments and Sanctuaries at risk are due within the week. These include Hawaii’s Papahanaumokuakea which, at half a million square miles is the world’s largest protected wilderness, and also home to over 70 percent of the nation’s coral reefs . Blue Frontier has already signed a marine conservation letter requesting an extension of the 30-day comment period – another request has gone out from members of Congress.

Ironically, given one of the alleged reasons for this review was lack of stakeholder input (ignoring years of citizen engagement at all levels) the limiting of the comment period to a month plus lack of any public hearings in places like California where four sanctuaries are threatened, puts the lie to that claim. Clearly it is not about what ‘we the people’ have to say, it is about oil and the political money behind it.

For templates of the sort of comment letter you might want to submit you can go to SaveOurMarineSanctuaries.org put up by the Ocean Foundation’s Richard Charter or the National Marine Sanctuary Foundation site at www.MarineSanctuary.org. You can also give your opinion directly!

Does Wilbur Ross Love the Ocean? 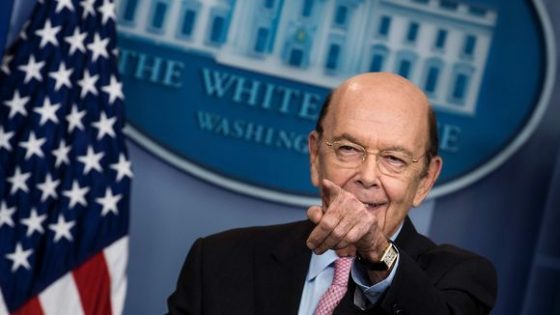 Donald Trump’s Secretary of Commerce, billionaire investor Wilbur Ross who will be receiving your public comments, recently took a loss for the nation when he sold his $18 million NYC penthouse for only $16.5 million in order to downsize to a $12 million mansion in D.C. for the duration of his public service. Along with their additional sprawling ocean front estate in East Hampton, he and his wife Hilary, also keep a $13 million 12-bedroom, 15 bath Villa in Palm Beach.

Hilary works as Society Editor for Quest Magazine that bills itself as,  “the last magazine devoted to Society with a capital S, covering the socially prominent in New York, Greenwich, The Hamptons, Palm Beach and Miami.” That would include their prominent oil industry friends Charles and David Koch.

Their Palm Beach digs are only about two miles from their other good friend Donald’s Mar-a-Largo resort, that is to say in the sea-level flood zone. Luckily the City Manager of West Palm Beach has already invested $150 million in pumps to transfer rising waters on the ocean side of the barrier island to the inter-coastal canal on the leeward side.   Otherwise climate maps suggest 25 percent of Trump’s property would be underwater later this century not to mention what might happen to the insurance rates on the Ross’s $150 million art collection most of which they keep there. The ocean certainly provides a nice background to highlight one’s possessions. I just wonder if any of them (Donald, Wilbur, their third wives) ever go to the beach or get in the water to connect with their blue minds. If so, they might soon be driven back out by the explosive sounds generated by oil survey ships. 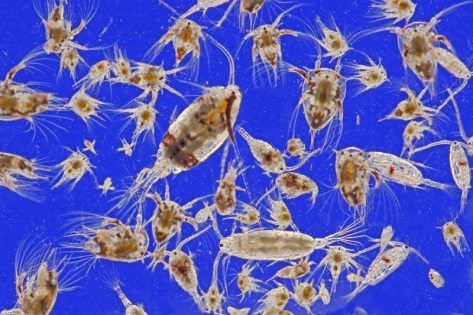 Turns out the offshore oil industry kills even before it drills and spills.

While the Department of Interior’s Bureau of Ocean Energy Management (BOEM) claim that, “there has been no documented scientific evidence of noise from airguns used in geological and geophysical (G&G) seismic activities adversely affecting marine animal populations,” that is because there have never been any scientific studies of airgun impacts on whole populations!

“We don’t have the studies that show mortalities but there’s lots of data of behavioral disruption including stress, impact on feeding habits and more [such as hearing loss],” marine acoustics expert Michael Stocker, founder of Ocean Conservation Research (OCR) tells me.

Now a new study out of Australia has found that the massively loud airguns used in oil exploration actually punch 2 kilometer (1.2 mile) wide holes in zooplankton living in the water column, reducing their abundance by two-thirds and doubling the number of dead zooplankton. Unfortunately these tiny animals form the base of the marine food web, bad news for the fish and mammals that depend on them including us. Read about it and weep for the krill.

For more on ocean noise pollution challenges check out OCR.org. 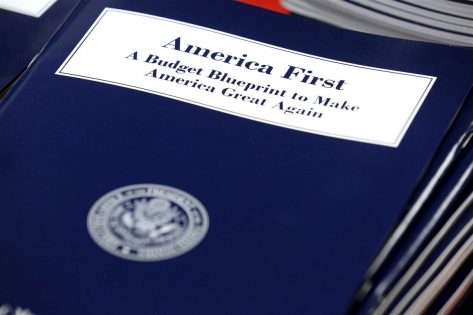 Say Trump’s budget (see Blue Notes #158) was like a shark that took your whole leg, the new House ocean budget would then be like a shark only taking your leg up to the knee. But wait, that is not a fair analogy. OK, let’s say you are a shark and the Trump budget chopped off your dorsal fin, tail and pectoral fins and threw you back in the ocean to die. The House version would only chop off your dorsal fin. You would still die, but you would die more slowly. Yes, that is a better analogy given sharks kill about eight humans a year while we kill one hundred millions of them. One way we actually keep track of these shark populations is with a fleet of aging oceanographic research vessels run by NOAA. That fleet of 16 could be down to 8 ships by 2028 under the newly proposed House budget that, among other things, denies NOAA’s request for $75 million to begin recapitalizing the fleet. In fact while Trump’s budget calls for a billion dollar cut to NOAA’s $5.6 budget, the House version would cut it by $700 million, no great improvement given the state of our public seas and need for more research, exploration and restoration. A few popular programs like Sea Grant, that Trump tried to kill off, have been restored to full funding under the House proposal.

Also restored is the small independent $3 million a year Marine Mammal Commission that oversees the Marine Mammal Protection Act (again, see Blue Notes # 158). Since the House budget will have to be reconciled with whatever the Senate comes up with it would still be helpful if you’d join 65,000 other people and sign the online petition to save the commission that I wrote with Aaron Viles of Care 2. The signatures are being periodically forwarded to the appropriate members of both the House and Senate overseeing the process.

Thanks to Ocean Conservancy and others who are doing a great job tracking this ocean budget disaster as it makes its way through the oil slicked halls of Congress. Be assured, our voices of protest and common sense are gradually having an effect. 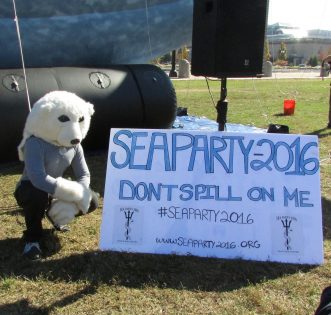 At the Blue Vision Summit in May we had 25 state delegations telling their elected officials in Congress to oppose oil drilling off our coasts, fully fund NOAA and more. When members of the House and Senate return home for their August recess they will be hearing a lot more from their constituents. People are worried about their health coverage but also the health of their beaches and ocean. Sea Party 2018 opposition to offshore oil drilling is not a partisan issue but a hugely popular one.

We encourage you to attend constituent meetings and town hall gatherings during the August recess if you don’t already plan to. Remind our D.C. politicians that they work for us and that people vote the coast and ocean. If you attended the Blue Vision Summit Hill Day remind your House Member and/or Senator that you’re following up with them to make sure they protect our beaches.

Send us photographic proof that you have met with them (or their staff) and we will send you a Sea Party T-shirt in your size and preference!

Same if you organize an anti-drilling event at a town hall meeting or with your member of Congress no matter what ocean conservation group, local business, city council or pod of dolphins you represent. And don’t forget to wear a Sea Party t-shirt and/or a dolphin or fish costume or wetsuit covered in chocolate syrup (looks just like spilled oil) or other dramatic symbol of this threat that will get the attention of both your neighbors and local media.

Remember: No more Deepwater Horizons, No more Dead Dolphins (or airgun-blasted Krill). The Ocean is Rising and So Are We! Don’t Spill On Me!’ (Chanted with fist or fin in the air).   We have had the Women’s March and the March for Science. It is about time to March for the Ocean. And no better time than the dogfish days of summer.

Other Ocean News You Can Use

Revenge of a U.S. Export Fishery 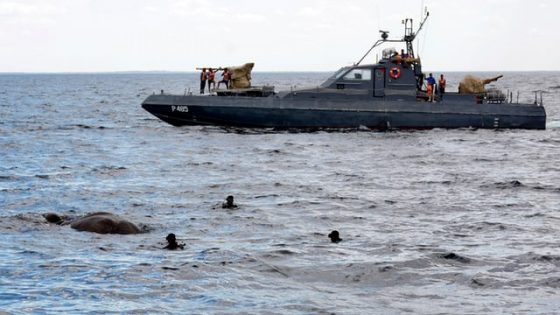 A Trillion Tons of Ice 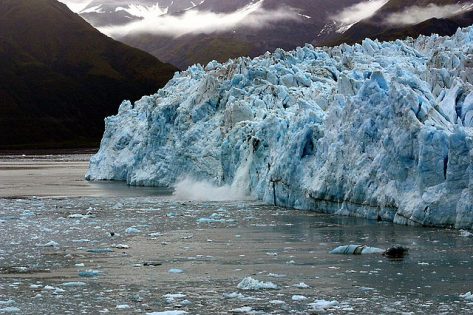 Build that Wall and Make the Sharks Pay for it 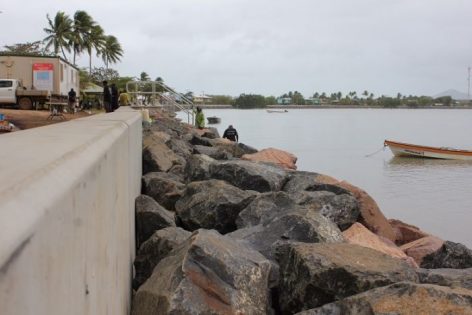 Support for Blue Frontier is “good news for fish, whales and coral reefs and for the future of humankind” – Dr. Sylvia Earle